These days you can bet on just about anything…..and I mean anything!
Did you know there is such a thing as E-sports? What in the world are E-sports I hear you ask.
We’ve all played video games, some of us still do, and some people are so good at it, they get paid to play video games.
Do you remember the 1989 film (are you old enough?) starring Fred Savage “The Wizard”, which had been described as one big “Nintendo Entertainment System and Power Glove advertisement masquerading as a feature film”, and included such gold nugget lines as this

“I love the Power Glove…it’s so bad!” .
However, what is important to note is the film was about getting paid the big bucks in high level computer game competitions. Before that time, getting paid to play such things had never been imagined. That was just a movie, essentially one Nintendo/the makers hoped would make kids dream they could make it big playing games (with the not so hidden message to buy the NES console and glove to achieve this dream), when in reality no such industry existed to support the dreams of all the kids and adults hoping they could make a living from having fun. 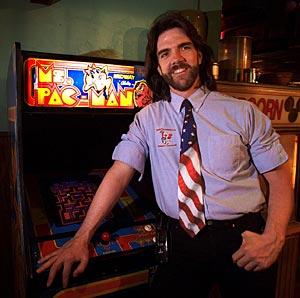 Yes there was the odd competition with prizes open to public, but for years there was essentially little to no contests or ongoing sport or career made out of it, except if you include the countless hours of rivalry and extreme competitiveness between millions of family members and mates at house parties.

Billy Mitchell and friends aside, times have changed, now they have gaming leagues! Well, for some time now professional game playing has been a sport, even in Australia. Who would have thought? I spoke to a girl from Melbourne the other week who made her living from playing video games. That was not even a job option to consider when I was growing up.

Well, where ever there is a professional sport played, very shortly after there comes people eager to bet on said sport.
Who would have though, but now you can bet on the outcome of people playing computer games! What a strange concept, and the possibilities of hackers and programmers to alter the outcome, give advantages and purposefully code bugs into the games makes for very complex advances in the world of match fixing. A real life cricketer may damage a ball slightly to get a slight advantage when bowling the ball, but a computer game hacker could theoretically make themselves invincible. Consider ignoring the technical loopholes, but keep in mind it would still be very easy for a player to throw the game or someone else with a vested interest to conspire with a player or even disrupt a player in-play to ensure they win a bet on the game.

In the digital age computer game players are much more accessible compared with high profile sports stars, and are probably a lot more willing to cheat due to their being less stringent authorities and regulatory bodies in place compared with elite sports leagues. It sounds like a nightmare for bookies, fans and game producers alike. As always the laws lag behind the latest advances and new technologies, and in the betting world, it seems companies are always trying to push the limits on this front.

Much to the chagrin of video game producers such as Valve (makers of Counter Strike: Global Offensive), betting on these online games is starting to become very popular, and Valve has attempted to stop all forms of gaming betting. However the most popular gambling sites are still taking millions of dollars worth of bets 2 weeks after Valve’s efforts.
Valve’s cease-and-desist letter said the betting sites are violating the company’s terms of service by using its software to facilitate betting and must stop by Friday, July 29.
Have they not heard of the Barbara Streisand effect? Them causing a big fuss has in a way massively promoted the not so well known fact that people can now bet on people playing computer games. People want what they can’t have. Valve’s actions and efforts to stop the betting on gaming are in a way one big promotion for the thing they want to avoid. It is creating news headlines around the world, reaching millions of readers and potential players who previously had no idea you could wager on the outcome of some kid in his parent’s basement and how he performs in the virtual world of first person shooter games.

The results will soon be in to see how this banning has affected the Counter Strike world (and online gaming in general). Many game tournaments in recent times have benefited greatly from huge increases in viewer numbers, largely due to the practice of allowing betting from fans looking for a bit of extra excitement when watching these competitions. As if geeking out over the BFG weapon wasn’t exciting enough.

One thing is for sure, it’s not the last we’ve heard of betting in the online world. As technology progresses and games become more popular, punters are going to have the ability to wager on the outcome of more and more bizarre things. Have you, or would you ever bet on a computer game? Is it a good thing to be able to put your money on, or do you agree it should be banned? What are some of the weirdest things you’ve ever bet on? Let us know your thoughts.